Two months ago I made a tragic discovery about the later life of John, 2nd Earl of Chatham: his wife Mary succumbed to severe depression, and was considered “insane”, in 1807-8 and again in the late 1810s. For those not in the loop I blogged about it here. I am bringing it up again because I recently had the opportunity to visit the place where Mary suffered for much of her second illness: Lord Chatham’s rented property of Abington Hall, Cambridge. 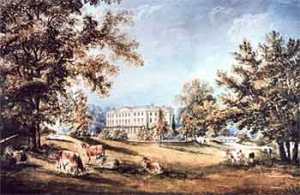 Lord Chatham had no country estate of his own. He had sold Hayes Place, his father’s seat, in 1785 and sold Burton Pynsent, his remaining property, in 1805. He had periodic access to other properties, either rented or borrowed: he used Cheveley Park, the Duke of Rutland’s hunting lodge, as a country estate from 1787 to 1797, and (mysteriously) had access to a property in Kent known only as “Gedding” from 1808 onwards (if anyone can assist me in tracking “Gedding” down I would be most grateful!).

In 1816 Chatham was looking for a property conveniently located for access to London that would allow him to indulge in his favourite pastime of hunting. He settled on Abington Hall, slightly less than ten miles from Cambridge, close to Cheveley and also to Audley End, where he had cousins. In March 1816 John wrote to the Bishop of Lincoln that he had “at length brought my negociation [sic], with Mr Mortlock to a successful issue”, following two months of bartering.[1] John Mortlock, Chatham’s new landlord, was by all accounts a prickly sort: he was a banker who served thirteen times as Mayor of Cambridge, which if nothing else shows perseverance.

So far, not a great deal is known about John’s tenancy of Abington Hall. I’m not even sure when he moved out. The History of the County of Cambridge and the Isle of Ely volume VI (Victoria County History, 1978) says he rented it “up to 1820” but a Heritage Assessment compiled in 2010 suggests he moved out in 1825.[2] Cambridge Archives dates the “Survey of Dilapidations” compiled on Chatham’s vacating the premises as 15 January 1824.[3] Neither of these dates makes perfect sense, since Chatham was in Gibraltar from November 1822 to July 1825, but he was certainly still at Abington in February 1821.[4] I did not manage to find out if John indulged in any planting, although it sounds from Dr Brown’s Heritage Assessment like he did to a limited extent (see references to “a small plantation”); but he is credited with white-washing the facade of the red brick house.[5]

As you can see the white-washing has seen better days:

When Chatham got his hands on it the house consisted of 40 acres, including extensive stabling and a walled garden. The house itself has been in the possession of The Welding Institute (TWI) since 1946, and the estate would be almost totally unrecognisable to John today, covered as it is in warehouses, workshops and staff facilities. The house itself has probably changed remarkably little, at least on the ground floor. (The piano nobile and servants’ quarters have both been converted into open-plan offices and bear no resemblance to their original layout.) I found it surprisingly small, given the kind of house I would have expected John to live in. I counted three drawing rooms/parlours and a dining room running along the back of the house looking away from the road. 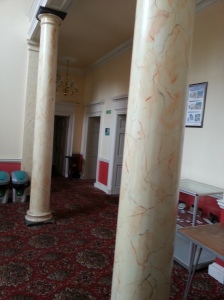 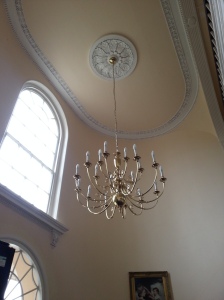 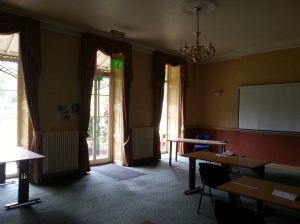 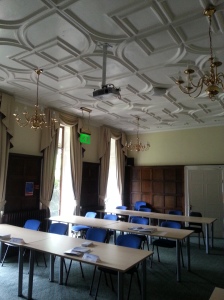 Above: two of the drawing rooms and (on the right) the dining room. The dumb waiter hatch was in the corridor just behind. The third drawing room (small enough possibly to be a parlour) was in use as an office so I did not photograph it.

As you can see, the rooms are largely recognisable as 18th century formal rooms. 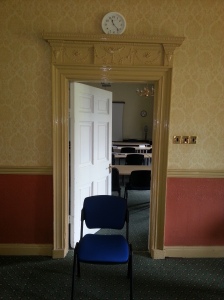 Above: some of the original features in the Hall

TWI’s Records Officer very kindly walked through the house and estate with me, and together we tried to guess at what the rooms might have been used for. He was very informative indeed and pointed out to me the road Chatham and his guests would have taken to approach the house from London (now with a warehouse built over it), where there had once been a bridge over the river leading to the village and church, and the location of the stables and walled garden, among other things.

I need to do some more research on Abington Hall to see if I can work out how Chatham would have used it and what he did to it (apart from white-wash it, obviously…), but it was thrilling to have the opportunity to visit a house that he lived in. Even if he almost certainly did not have happy memories of his time there.

[3] 15 January 1824 Survey of Dilapidations at Great Abington Hall on lease from Thomas Mortlock, esq. deceased, to the Earl of Chatham. Cambridge Archives, K296/B/A/29

Many thanks to Hazel Jackson and Lee Pretlove of TWI and Abington Hall Conference Centre.