Readers may be interested in (if ever so slightly creeped out by) my friend Stephenie Woolterton’s latest post on her excellent blog, The Private Life of William Pitt the Younger.

She has unearthed some previously unseen photographs of Pitt the Younger’s death mask, taken for the sculptor Nollekens the day after Pitt died.

They are amazing– rather gruesome, and it is certainly evident that Pitt was in a very, very bad way, but without a doubt the closest we will get to a photograph of Mr Pitt’s face.

Brace yourselves and take a look. 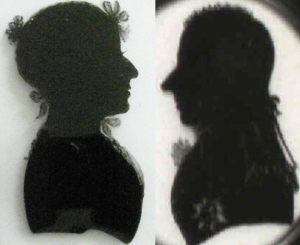 I know it’s a day early, but I’d like to post in honour of the 231st wedding anniversary of John, 2nd Earl of Chatham and his wife Mary Elizabeth Townshend and I can’t guarantee I’ll manage tomorrow. They are obviously the main characters of my WIP and I have done a lot of research on their lives in the past year. Not all my discoveries have been pleasant, but I have learned a lot about them and I feel much closer to them now than I did this time last year. (You can read last year’s post about their marriage settlement here.)

John and Mary were married by special licence at the house of Mary’s father, Thomas Townshend, Lord Sydney, on 10 July 1783. John was twenty-six, Mary twenty. They had known each other since they were children and it was a love match between longtime sweethearts. Despite rumours that John had a mistress I have not been able to substantiate them, and on the contrary all the evidence points to the closeness of their relationship. The marriage was destined to last nearly thirty-eight years, coming to an end when Mary died on 21 May 1821 at the age of fifty-eight.

As husband and wife the pair suffered more than their fair share of trials and tribulations. Mary’s health was always poor. She suffered from some sort of premature-onset arthritis in her hip that left her permanently lame, and never managed to carry a child to term, although she miscarried at least once. She shared in all her husband’s twists and turns of fortune, accompanying him as much as she could on his military postings throughout Britain, and retiring with him into political obscurity after he commanded the disastrous Walcheren expedition in 1809. In 1807 Mary suffered a prolonged mental breakdown, and although she recovered she relapsed more or less permanently in 1818. You can read more about John and Mary in my guest posts for “Madame Gilflurt’s” excellent blog.

I’d like to leave you with a short excerpt from my WIP in which I describe John and Mary’s wedding. Please join me in raising a glass of claret to the happy couple!

`My lord Chatham, if you will repeat after me…’

Mary’s heart beat a hectic rhythm in her chest as Dr Courtenay, the parish rector, took the ring off the Bible and slipped it onto her finger. She did not take her eyes off John for a moment. He wore a cream silk suit trimmed with silver to match her gown. His hair was immaculately curled and powdered and his eyes held hers with an intensity that made her heart beat faster. He echoed Courtenay’s words, precisely and with great concentration.

`With this ring I thee wed. With my body I thee worship, and with all my worldly goods I thee endow. In the name of the Father, and of the Son, and of the Holy Ghost, Amen.’

`Those whom God hath joined together let no man put asunder,’ Courtenay said. John put his hand over Mary’s; the sensation of his warm flesh pressing the cold band of the ring into her finger sent a shiver of excitement through her. `I pronounce that they be man and wife together. My lord, you may kiss your bride.’

The wedding guests applauded as John leaned down to bestow a chaste kiss on his wife’s lips. Mary saw his eyes dart towards the chairs arranged before the windows of her parents’ drawing-room. Her father, created Viscount Sydney in one of Lord Shelburne’s parting acts as minister, sat beaming a few feet away. Arrayed beside him were his wife and Mary’s six siblings, from Georgiana to three-year-old Horatio, sucking his thumb on his eldest sister’s lap. Behind were William and Harriot, both grinning broadly.

Mary knew how self-conscious John could be in front of an audience, but she had no intention of letting him get away with that kiss. She wrapped her arms around her husband’s neck and murmured into his ear. `Does Mary, Countess of Chatham not return your kisses so sweetly as Miss Mary Townshend?’

His face cleared instantly. `I do not know. Perhaps we should put it to the test?’

He cupped her chin and kissed her again. In an instant her world narrowed down to the sensation of his lips against hers and Lord Sydney’s elegant drawing-room, with all its inhabitants, was lost to her.

Mary kept her hand in John’s as the guests came over to congratulate them. Her father and mother led the way, enormous smiles on their faces. Lady Sydney kissed John on each cheek. Lord Sydney pumped John’s hand up and down, unable to say anything other than `Well done, Chatham, well done indeed,’ for all the world as though John had just won Mary in single combat.  Last came William and Harriot. Harriot slipped her hand through her new sister-in-law’s arm and William clasped John’s hand with genuine pleasure.

`Marriage suits you,’ Harriot observed. Her eyes were like John’s: they had the same heavy-lidded, almond shape, the same shade of greyish-blue flecked with brown, fringed with the same dark lashes, but Harriot’s were full of a mischief Mary had never seen in her husband’s. `Why, you nearly look handsome.’

`You know Harriot,’ William said. `She never flatters. But as far as I am concerned you look splendid. Lady Chatham too.’ Mary glanced over her shoulder, half-expecting to see that John’s mother had just entered the room, then realised William was talking about her and felt the blood rush to her cheeks. `Congratulations, my lady. Welcome to our family.’

`Too late to change your mind I’m afraid,’ Harriot put in.

`I don’t think I want to,’ Mary said. She could not help slanting a mischievous look up at her husband. John smiled back and dropped a brief kiss on her lips.

He spoke flippantly and Harriot and William laughed, but Mary detected strain in his voice. When he was not paying attention she looked at him more carefully, peeling away the silver-lined coat, the pomaded, curled hair, and the aura of quiet gentility and pride he wore like a cloak. She saw the pallor of his skin and the tightness around his eyes and thought: He is as nervous as I am. She wondered if she was the only one to notice, for even William and Harriot continued to jest at him as though they did not see his jaw tighten further with each joke.

It was as though she could see him better than anyone else in the room, as though her love were a filter stripping away everything but the raw thoughts and emotions that made him John. She took his arm and he turned to her with a smile she was beginning to recognise belonged only to her. The connection between them felt more than physical, as though if Mary withdrew her arm she would still be holding him, even if they were hundreds of miles apart.