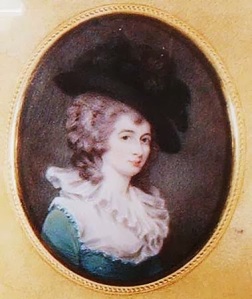 Today (2 September) is Mary, Countess of Chatham’s 252nd birthday. Everyone who reads this blog will know how much I love her, and how much I wish her story had had a happier ending. For today, though, we’ll stick to the positives.

I haven’t got much to add to the biographical post I wrote for Madame Gilflurt in May, but I wanted to quote two pieces I have referred to in the past. There’s precious little about Mary in the historical record, which I think is at least partly a tribute to her retiring nature. The following poem, found among the Marsham-Townshend papers at Bromley Archives, certainly corroborates this. I have no idea who wrote the poem (presumably either a family member or a friend), and Shakespeare it ain’t, but it encapsulates my view of the private nature of Mary’s character perfectly:

The Countess of Chatham

Aye! There’s a creature feminine, of whom

The world may proudly boast, with store of charms,

And blandishments that so bedeck the Sex;

She from the yielding of her gentle heart,

The flaunting scenes of Court parade, to act

The humble duties of Domestic life.

Simply attired as innocent in Mind,

With all the Sweet benevolences graced,

Her polish came by habit so engrained

The other piece I’d like to quote is one of the few letters I have seen written by Mary not petitioning for patronage for a family member or servant (and she had such a wonderfully embarrassed way of doing it too). I daresay there are large piles of Mary correspondence hiding away in private collections, but I was staggered to find six or seven letters which she wrote to Catherine Stapleton quoted in The correspondence of Field Marshal Viscount Combermere (London, 1866), vol 2. Mrs Stapleton was the companion of Mary’s mother-in-law, Hester, Dowager Countess of Chatham. One day I will try and track down where the originals of these letters actually are, but in the meantime I will be satisfied with the doctored snippets found online.

Mary, Countess of Chatham (ca 1800) by Charles Rosenburg of Bath; in the possession of Ron Mills

Clearly Mary was capable of writing of other things than patronage, and one or two of her letters even contain a fair amount of politics. While she never tried to assert herself as a political hostess, I suppose it was inevitable that the prime minister’s sister-in-law would be interested in current affairs. The following letter was clearly written in 1794, either just before or just after Pitt the Younger coalesced his government with the followers of the Duke of Portland, former oppositionists who had broken with Charles James Fox over the French Revolution.

Mary starts off with a dryly humourous account of a ball, at which the former Oppositionists showed their faces at Court for the first time in many years. She then makes some brief observations on the inconveniences of Courtly fashion.

We had a very grand ball at the Queen’s house on Monday, and a very good one, as they always are. Among the company a great many repentant sinners. Portlands — it was comical enough that the first ball Lady M. Bentinck should go to should be at the Queen’s house — Fitzwilliams, Carlisles, Spencers, Jerseys, Mansfields — it seemed quite odd to see them all. … Lord Carlisle and Lord Spencer are my two favourites, though, of them, nothing can be more thoroughly manly and honourable than their conduct. … The feathers in the Queen’s face is what now always happens with all young ladies who kiss her hand, for in the way in which they now wear them it is unavoidable, though the Queen leans as far back as she can; to be sure it annoys her, but she’s always good-humoured to young ladies … The Cabinet dine here, and I must get out of their way; so I go to keep a long standing promise to my brother and Mrs T[ownshend], and my carriage is now come. Adieu! Yours affectionately, MEC. [3]

I can’t help wondering what Mary would have said about Lord Spencer, had she known he would shortly supplant her husband as First Lord of the Admiralty…

The above, then, is a tantalising taste of Mary’s epistolary style. I would give anything to find more of Mary’s letters. From what I have seen she had a very similar tone and outlook to her husband: clearly they were a good match in terms of personality.

So happy birthday, Mary. I think it’s about time you received some recognition!

[1] Mary, Countess of Chatham, from an unknown source. I am trying to track down further information on this miniature, the only known portrait of Lady Chatham (apart from the Rosenburg silhouette) that I know of. (The Reynolds portrait you will find elsewhere on the internet is not of Mary, but her aunt.) If anyone has any information on this miniature, please contact me using the form on the About Me page.

One thought on “Happy 252nd birthday Mary, Countess of Chatham”