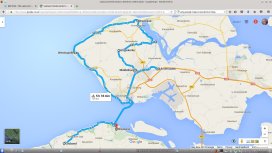 A few days ago I posted about my trip to Walcheren in the Netherlands, where my other half and I cycle-camped for several days last week. I wanted to do some on-the-spot research for my upcoming biography of the 2nd Earl of Chatham, who commanded the military part of the abortive British expedition to Walcheren in 1809.

For a brief historical overview of the campaign, and an account of my visit to Vlissingen (Flushing) and Middelburg, please see Part 1. See Part 2 for my account of Arnemuiden, Grijpskerke, and Breezand. Otherwise, read on for Part 3 of my Walcheren peregrinations…

This was our most beautiful day yet: about 20ºC and SUNNY. We left Breezand to cycle along the coast back to Vlissingen.

Our intention was to take in the two beaches where the British ought to have landed: Zouteland Bay (abandoned at the end of July at Strachan’s request) and Domburg (abandoned because of the weather).

We did not spend much time at Domburg, but I stopped to climb to the top of the tall seaward dyke to take a photograph of the beach.

We then proceeded with all dispatch to Oostkapelle. Here we stopped for lunch, just outside the 1944 museum. There were a number of WWII museums on Walcheren. Obvious reasons for this, but I did find myself having the following conversation more than once:

Me: I’m here because I’m reasearching the Walcheren expedition.

Next stop was Zouteland Bay. By this time the sun was shining enthusiastically, and other half and I were both beginning to look a little pink about the ears. We decided to pause only briefly to take a photo or two of the beaches where the British really ought to have landed, had they not kept changing their landing plans every five seconds. Other half remained with the tandem, while I climbed to the top of the pretty high sandhills.

Minutes later I came down and fetched him, because the view was stunning.

View down to Zouteland beach

View towards Middelburg from the dyke above Zouteland Bay

I could see the whole island (OK, peninsula now) from the top of that dyke. On the distant horizon I could see the windmills along the Veere Dam, near Breezand. Further along were the steeples of Domburg and Grijpskerke churches. Veere was just about visible directly across. The Lange Jan at Middelburg could clearly be seen, as could the tall buildings at Vlissingen.

It was a salutary reminder of how small Walcheren actually is (we could have easily cycled round the whole thing in a day, had we not stopped to do the tourist thing). I imagine that when Chatham’s army had landed at Breezand and were marching in four columns through the interior, the various columns would have remained in sight of each other most of the time (barring more greenery on trees, and decreased visibility due to rain and mist, of course).

The beach was pretty, too. But, as my husband observed: “Thank goodness they didn’t land here, because they would have had a hard time fighting up their way up these sandhills.” They were the tallest sandhills we encountered on the whole island. In 1809 they were probably different, but I imagine not that much different, and topped with very prickly gorse. The French would probably have given a much stiffer resistance here, particularly as Zouteland is so much closer to Flushing.

As we discovered, since it took us only half an hour to cycle into Flushing after stopping for these photos. We stopped at De Nolle campsite, chosen by me mainly because it was clearly located somewhere between two of the British batteries erected outside Flushing during the bombardment (the Nolle and Vijgeter batteries).

In the postwar era, this area of Flushing has been completely levelled and rebuilt, so there is no real way of knowing exactly where the British batteries were (and in any case I had to leave all my books at home, since we were travelling light, so had no 1809 maps with me). But it was still pretty thrilling to be camping very close to where the British established their lines in 1809. It was a surprisingly long way from the old town itself, but then we were probably a little further out than the actual Nolle.

The time had come to say goodbye to Walcheren. We packed up our tent and cycled to the Breskens ferry.

This was our last view on Flushing as we crossed over to the mainland: 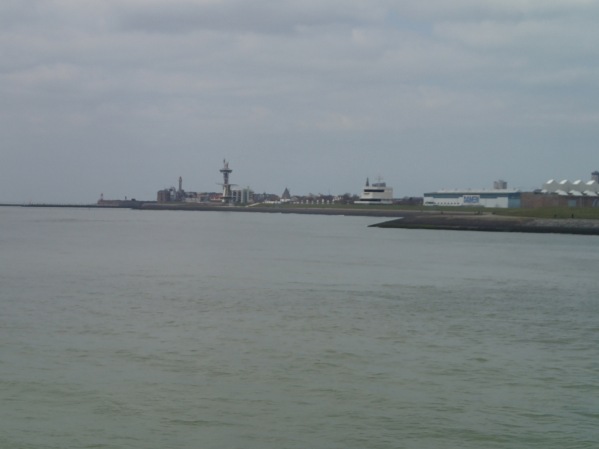 We were surprised to see dozens of enormous, heavily-laden cargo vessels sailing through the Flushing roads. Some of them actually crossed the path of our ferry, although I suspect their passage was well-timed to avoid any accidents!

The navigation of the West Scheldt was much better-known to the British than that of the East in 1809, hence the decision to attempt sailing down the West rather than the East Scheldt to reach Antwerp. The river is evidently much deeper here in parts, as the cargo boats showed. However, the navigation is clearly still very tricky. In 1809, during the bombardment of Flushing, Strachan’s flagship and that of one of his subordinates, Lord Gardner, ran aground on sandbanks. Even now every cargo vessel received the aid of a tiny pilot vessel (there were half a dozen of them sheltering in Flushing harbour at all times, zooming constantly in and out): 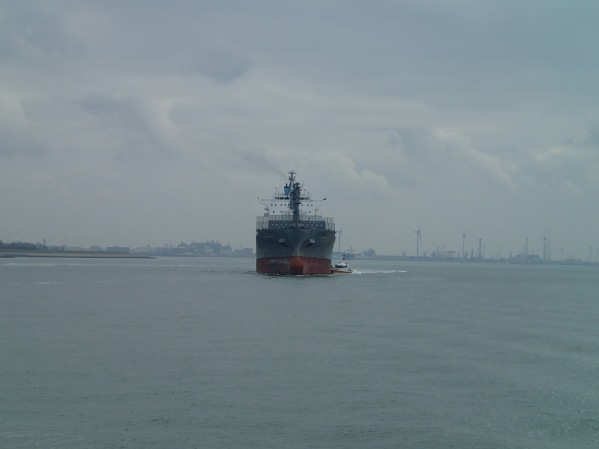 Cargo vessel with pilot outside Flushing

By lunchtime we were back on the Cadzand shore. We cycled like the blazes and got across the border into Belgium in no time (uneventful, except for my husband dropping the tandem at one point as we came to a stop… ouch!).

We spent the next two days cycling back to Dunkerque. The return crossing was much less rough and we returned to Oxford at half past ten PM in the evening of Monday 4 April, having covered just over 450 km.

We had so much fun. I’d do it again in a heartbeat — particularly as there is so much we did not see!