Yesterday I had the opportunity to visit St George’s Chapel Archives at Windsor Castle, where I spent an instructive morning perusing the Garter Registers and chasing Lord Chatham’s officially recorded movements as a Knight of the Garter.

Chatham was elected a Knight of the Garter in December 1790, as I explain in my guest post for English Historical Fiction Authors on the Order of the Garter during the reign of George III. The Garter should have gone to his brother Pitt the Younger, but Pitt wrote to persuade the King to give it to Chatham instead.

One of the most notable features of Chatham’s character was his love of pomp and status, so I can imagine he was thrilled to be admitted to Britain’s oldest and most prestigious Order. Although he was invested with the Garter in December 1790, he was not fully “installed” (for more on the distinction between the two ceremonies see my EHFA post) until May 1801, when the King dispensed with the full ceremonies for twenty-three uninstalled Knights. 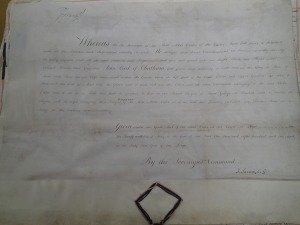 After his “installation”, Chatham was finally permitted to enjoy the full privileges of the Order. Before, he had only been allowed to wear the ribbon and Lesser George: now he was allowed to wear the Star, or “Glory”, and surround his crest with the Garter insignia. He was allowed to attend Garter Chapters, and was allotted a stall in the quire of St George’s Chapel, although I am informed this would have changed according to Chatham’s seniority in the order (in other words, every time a senior knight died, Chatham’s stall would move one step closer to the Sovereign’s).

He was also allowed to affix a stall plate to the back of the stall, listing his “achievements”. I have been permitted to see Chatham’s plate, although not to photograph it, but it was put up shortly after his installation in May 1801 since it records him as being a Major-General and Lord President of the Council. The achievement is in French: “le noble et très puissant Jean, Comte de Chatham”. 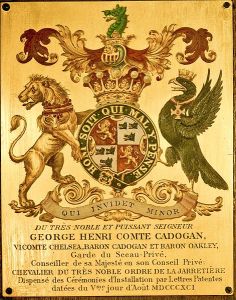 Many Knights of the Garter died without being installed, including Chatham’s good friend the Duke of Rutland, who was invested in 1783 and died in 1787. Rutland, though, was an exception to the rule: when he was made Lord Lieutenant of Ireland in 1784, the King gave him permission to use the Garter Insignia and wear the Star as though he had been fully installed.[1]

Plan of the stalls of the Knights of the Garter as they stood in 1828 , from “The Visitants’ Guide to Windsor Castle” (thanks to regencyhistory.net for this)

My purpose in consulting the Garter Registers was to track Chatham’s attendance record as a KG at Chapters and official Dinners. By statute all Chapters were recorded in the official Registers, and all attendees’ names were noted down. I had been informed Chatham’s attendance was patchy: I wanted to see whether this was true. I must admit I was surprised to hear Chatham wasn’t a frequent attender. Despite his reputation for laziness, Chatham was very proud of his Garter.

I can now report that Chatham’s attendance was not as bad as it looks. He was elected to the Order at Chapter XV, held at St James’s Palace on Wednesday, 15 December 1790, at the same time as the Duke of Saxe-Gotha and the Duke of Leeds. Present at this Chapter were the King, the Prince of Wales, the Dukes of Gloucester and York, and the Marquis of Stafford, along with the Prelate, Chancellor, and Registrar of the Order (the Officers), and Garter King of Arms and Black Rod.[2] Members of the Royal Family seem to have been keen attenders of the Chapters, much as one would expect (and a Chapter could not be held without the Sovereign or his representative, so he is pretty much the only person with a 100% attendance record). But only fully installed members of the Order could attend Chapters, so Chatham’s name does not appear again until Chapter XXIII, the first Chapter after his installation, held on 25 November 1803 at St James’s Palace.

Up until then, Chapters had been thinly attended (remember, only fully installed members could attend), and often only members of the Royal Family turned up. But the 1803 Chapter was rather different. The King was present, and the Dukes of Gloucester, York, Clarence, Kent, and Cambridge, but nine Knights Companion turned up too: apart from Chatham, the Dukes of Richmond, Portland and Roxburgh were there, as well as Lords Cornwallis, Salisbury, Westmorland, Spencer, and Camden. Presumably they needed a rather bigger room than they had been accustomed to using.[3]

After that, Chatham attended quite regularly. He was at Chapters XXIV, XXV and XXVII (17 Jan 1805, 27 May 1805, and 18 July 1807), and the Installation of April 1805. He missed Chapter XXVI, but since that took place on 22 March 1806 I’ll give him a break: his brother hadn’t even been dead two months, and his wife was still extremely unwell. He was not at Chapter XXVIII, on 3 March 1810, but I rather think he was otherwise engaged appearing at parliamentary enquiries and trying not to be impeached after Walcheren. Interestingly, though, he did attend the St George’s Day Dinner at Carlton House in April 1810. Given his name was mud at this stage, I cannot help wondering if it was a bit of a defiant gesture at the government: “Yah, yah, yah, I still enjoy royal favour.” Of course, maybe he just needed a bit of fun.

He may have attended the 1811 St George’s Dinner as well, but the attendees are not separately listed so there’s no way of knowing. Only one other Dinner is recorded, for 1812, and Chatham was not present.

Returning to the Chapters, he missed Chapter XXIX in March 1812, but he was at Chapters XXX-XXXI and XXXIII-XXXVII (he missed XXXII, on 4 March 1813, for no obvious reason that I can think of). He was absent from Chapter XXXVIII, on 24 July 1817, but this was around the time that his wife fell victim to her second bout of mental illness, so it’s not much of a surprise to see him absent until Chapter I of the reign of George IV (7 June 1820).

After this Chatham disappears almost completely from the record, but then Chapter II of George IV was not held till 1822, when Chatham was in Gibraltar. After his return in 1825, however, he never attended another Chapter, and there were 13 more Chapters and 2 St George’s Day Dinners held before Chatham’s death. Most of them were held during the reign of William IV, though, when Chatham’s health was poor, and he was mostly in Brighton when the Chapters were held. Still, Camden and Westmorland, his contemporaries (and close friends), were still attending nearly every Chapter.

The final mention of Chatham records his passing:

“On the 24th September 1835, in Charles Street Berkeley Square, Died, General The Right Honourable John, Earl of Chatham, Knight Companion of this Most Noble Order.”[4]

So no, not a brilliant record, but then Chatham was actually unable to attend 10 of the Chapters due to being either ineligible or out of the country, and missed a further 5 due to circumstances out of his control (family illness or bereavement, or — say — political disgrace). As a result, I make out he attended 11 out of 26 possible Chapters.